A "data cable" made from stretched nerve cells could someday help connect computers to the human nervous system. The modified cells should form better connections with human tissue than the metal electrodes currently used for purposes such as remotely controlling prosthetics (see Brain implant enables mind over matter).

"The nervous system doesn't like nasty hard metal or plastic," says Doug Smith, who is developing the cell-based cable at the University of Pennsylvania, US. Nerve tissue can develop scarring or shrink away from contact with metal and other non-biological materials, he says.

"Nerve cells will happily grow to form new connections with new nerve cells though," Smith adds, "we want to try that as an alternative to ramming something into a nerve or the brain. The idea is to make a kind of extension cord." Prototype cables developed by his team have already been shown to transmit simple signals effectively.

Vertebrane may be here sooner than we think...

A level or two above the "Grand Challenge"

A contest to build a robot that can operate autonomously in urban warfare conditions, moving in and out of buildings to search and destroy targets like a human soldier, was launched in Singapore on Tuesday.

The country's Defence Science and Technology Agency (DSTA) is offering one million Singapore dollars ($652,000) to whoever develops a robot that completes a stipulated set of tasks – yet to be revealed – in the fastest time possible.

Every morning Dennis Colson, a surveyor at New York City's Department of Design and Construction, begins his work day by placing his hand on a scanner to log his time and attendance at the office.

But the planned roll-out of hand geometry scanners in all New York City government agencies has sparked union cries of "geoslavery" and assertions that technology developed for security will be used to track, label and control workforces.

Reports out of Korea of newly developed guard robots capable of firing autonomously on human targets are raising concerns about their potential uses.

The new Intelligent Surveillance and Security Guard Robots reportedly will be commercially available later this year and are expected to be deployed along the northern border of South Korea.

At an estimated cost of $200,000 each, the units are equipped with daylight cameras capable of identifying targets in a 4km radius, and infra-red night vision offers a range of 2km.

Ethicists have always questioned the use of technology in weapons development, but the new robots are causing additional disquiet because of their self-directing capabilities.

Although the units allow human intervention through joystick and touchscreen controls, they are also reportedly able to respond autonomously if an intruder fails to provide the correct password.

This topic has been discussed many times in this blog:

IS THE writing on the wall for the brickie? Engineers are racing to unveil the world’s first robot capable of building a house at the touch of a button.

The first prototype — a watertight shell of a two-storey house built in 24 hours without a single builder on site — will be erected in California before April.

A rival design, being pioneered in the East Midlands, with £1.2m of government funding, will include sunken baths, fireplaces and cornices. There are even plans for robots to supplant painters and decorators by spraying colourful frescoes at an affordable price.

By building almost an entire house from just two materials — concrete and gypsum — the robots will eliminate the need for dozens of traditional components, including floorboards, wooden window frames and possibly even wallpaper. It may eventually be possible to use specially treated gypsum instead of glass window panes.

Engineers on both projects say the robots will not only cut costs and avoid human delays but liberate the normal family homes from the conventional designs of pitched roofs, right-angled walls and rectangular windows.

“The architectural options will explode,” predicted Dr Behrokh Khoshnevis at the University of Southern California in Los Angeles, who will soon unleash his $1.5m (£940,000) robot. “We will be able to build curves and domes as easily as straight walls.

“Your shoes, clothes and car are already made automatically, but your house is built by hand and it doesn’t make sense.”

In Manna, the robots build welfare warehouses out of a material called Terrafoam. This concrete/gypsum mix may be the Terrafoam that they really use.

In the U.S. there are approximately 6 million people employed in construction. For them, the Robotic Nation may start arriving sooner than anyone thought possible.

UAVs can now land and take off themselves

Fire Scout has the ability to autonomously take-off from and land on any aviation-capable warship and also at unprepared landing zones close to the Forward Edge of the Battle Area (FEBA). It can carry out surveillance, find tactical targets, track and designate targets and provide accurate targeting data to strike platforms such as strike aircraft, helicopters and ships. The UAV is also able to carry out battle damage assessment. The Navy is currently using the Pioneer UAV and has 21 Pioneer systems operational on its ships.

So, the vehicle can take off and land itself, and it can fly where ever it needs to go on its own (using GPS signals as well as inertial guidance). And it can find and designate targets.

How much longer will military and commercial pilots have jobs? See Robotic Nation for details.

Here is the first sentence of the article:

A model of a futuristic driverless bus which promises to cut pollution and congestion has been unveiled.

The bus is an electric/bio-fuel hybrid and the lack of a driver is expected to reduce operating costs by up to 50%.

It is that 50% reduction that will drive the Robotic Nation. In every industry, it will be the same.

HP Engineers Defy Moore’s Law, New Nano-Chip Prototype in 2008: "HP announced today that its research department came up with a breakthrough discovery, which could lead to the creation of field programmable gate arrays (FPGAs) up to eight times denser... Applications of FPGAs include DSP, software-defined radio, aerospace and defense systems, ASIC prototyping, medical imaging, computer vision, speech recognition, cryptography, bioinformatics, computer hardware emulation and a growing range of other areas. FPGAs originally began as competitors to CPLDs and competed in a similar space, that of glue logic for PCBs. As their size, capabilities, and speed increased, they began to take over larger and larger functions to the state where some are now marketed as full systems on chips (SOC)."

Description: "Surgical Robots are here now; they have their roots in Stanford based research and Silicon Valley development. How do they work? What can they do? Thomas Krummel, MD, addresses the current uses of surgical robotics, the reasons for using them and their role in future medical treatments."

The following image was scanned from a science book for kids entitled "Mysteries and Marvels of Science", published by Usborne: 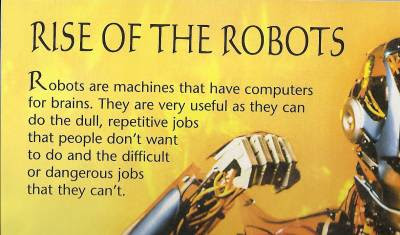 It demonstrates the conventional wisdom for robots in the workplace - that robots will take only the "repetitive" and "dangerous" jobs.

Of course, as robots get more and more capable, there will be nothing that boxes them into these specific job categories. Economic pressure will demand that robots fill all jobs as soon as they can do so. So, robots will replace every truck driver, construction worker, restaurant employee, retail clerk, real estate agent, pilot, doctor, etc. in the not-so-distant futue. And thus we will arrive at the Robotic Nation.

Plastic may spell the end of the silicon microchip

Plastic won't spell the end of silicon, but it will offer a lower-cost alternative in many applications. From the article:

The initial products from the factory will be pieces of plastic about A4 size. The basic plastic substrate will be polyethylene terephthalate, a form of plastic used to make drinks bottles.

“I would not be surprised if Prof Sirringhaus gets a Nobel prize for his achievements in this technology,” says Mr Hauser.

By 2009 the Dresden plant should be producing 2.2m units of A4-size semiconductor sheets a year. They will initially be used as flexible “control circuitry” for large displays the size of a piece of paper that can hold large amounts of information – equivalent to thousands of books.

The displays will most likely be made by other electronics companies, with Plastic Logic providing the crucial control circuitry and possibly licensing its designs.

Mr Hauser adds: “We hope to make it as easy to carry around large amounts of written information using devices based on our technology as it is now to have easy access to large amounts of music using an iPod or MP3 player.”

But under development in Plastic Logic’s research operations are plastic circuits that are just 60 nanometres in dimension, says John Mills, chief executive officer, holding out the possibility that before long the electronic characteristics of the company’s plastic devices might not be too different from those of conventional silicon chips.

At that point, says Mr Hauser, the world may be ready to embrace a new form of microchip – based on the A4 sheets due to emerge from the Dresden plant but a lot smaller – that could be cheap enough to do jobs for which current silicon devices are too expensive.

For instance, the chips could form part of cheap toys that tell children how they are to be used or, depending on how they are programmed, remind them to do their homework. “Plastic electronics could lead to a fundamental revolution in the way the electronics industry evolves”, says Mr Hauser.

Developments like these will also lower the cost of robots, and make them more powerful in their thinking.

Catching a Killer, With Help From a Camera

As more and more cameras are installed, police are able to track criminals across broader landscapes:

Detectives needed more clues. While there were no human witnesses to the killing, there were potentially dozens of mechanical ones. On nearly every block of downtown Philadelphia, a motley assortment of cameras watch over department stores, lobbies, storefronts, office and apartment buildings. So investigators went door to door, collecting tapes.

In the Robotic Nation, every thing you do will be filmed, not by a "motley assortment" but by an organized whole mounted on mobile, ubiquitous robots. See Robotic Nation for details. In all likelihood, the idea of an "unsolved crime" will be eliminated within the next decade or two.