Explains how the winners did it:

Lexus Cars to Get Electronic Eyes

Giving cars the ability to detect pedestrians, pets, and other road hazards just got easier. NEC Electronics on Friday launched an image processor that will first go into cars made by Toyota.

To see where we are headed, look at where graphics processors went in 25 years:
Circa 1980 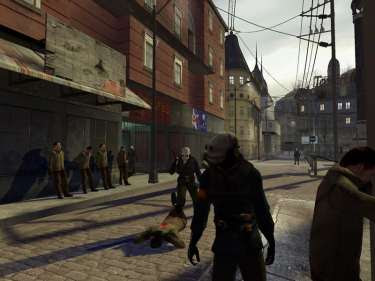 Vision processors will move at the same pace. To see where this development takes us: Robotic Nation and Manna

The vision of an autonomous forklift truck

Although driverless transport systems have been used to automate processes since the 1960s, the utilization of these systems is greatly restricted when compared to conventional forklift trucks with human drivers. In order to improve the situation, a co-operation between the company STILL GmbH and the L3S/ Institute for Systems Engineering of the University of Hannover was set up with the objective of developing an autonomous forklift truck to facilitate flexible navigation and material handling. The forklift trucks developed within by the co-operation enable the machine to recognize palettes, to lift these up and to move them to another location autonomously.

They represent one of several dramatic recent advances in the world of automation: rather than solve a problem with one big machine, send out a swarm of smaller, networked robots that share information and operate as a team, borrowing principles from ants or other efficient members of the animal kingdom.

"You distribute the task among many, many guys," said Vijay Kumar, chair of Penn's mechanical engineering department.

Five years ago, engineers had trouble coordinating the efforts of two or three robots, said George Bekey, a University of Southern California robotics pioneer who attended the conference.

With today's sophisticated algorithms, they can manage dozens.

Video is available here and here.

The Robots Are Coming!

The Robots Are Coming!: "The robots are on the move--leaping, scrambling, rolling, flying, climbing. They are figuring out how to get here on their own. They come to help us, protect us, amuse us--and some even do floors."

Imagine when we start creating things like this that are autonomous robots...