While Honda and Sony have said they are not considering selling their models in the foreseeable future, the daily said Tokyo plans to market its workman robot.

It is interesting that this article mentions "nursing care". The conventional wisdom holds that nurses (like teachers) will be immune to robotic replacement. But nurses are under fire even in 2004:

Robot gets job as nurse

The University of South Alabama Medical Center is participating in a three-month clinical trial that will explore the use of a robot as a solution to the nationwide nursing shortage, hospital officials announced Monday.

If there is this much corporate demand to replace nurses now, imagine how quickly nurses (along with teachers, waiters/waitresses, store clerks, etc. etc.) will be replaced once there are humanoid robots like Toyota's available off-the-shelf to take over these jobs. See Robotic Nation for details.

Most robots in science fiction look like C-3PO or R2-D2, and most robots in the workforce today look like industrial arms. The new trend is toward creating robots that look completely human, as discussed previously. Now there is a new version of a human-looking robot from Japan called the Actroid. See, for example, this article.

Economists like increases in productivity because the gains can improve the earnings and living standards of working Americans. But an economy that fails to distribute the fruits of rising productivity to those who have helped create it is as flawed as an economy that delivers little or no productivity increases at all. Yet this is exactly what has been happening in the United States.

Even in the technology-driven boom of 1995 to 2000, the average annual growth of employee compensation was a dismal 0.7 percent, while worker productivity grew more than three times faster at 2.48 percent. The latest data show no narrowing of the gap.

The concentration of wealth that this article talks about -- where productivity grows but employees see little of the benefit -- is discussed in Robotic Freedom.

The author gives an example of why this is happening:

The call-center industry, which employs up to 6 million Americans, provides a compelling example of the new type of assembly line at work. In the industry's heartland of Arizona, Iowa, Nebraska and South Dakota, there are thousands of workplaces where managers peer into employees' computers with their own, govern their every utterance with prepackaged digital scripts, listen in on their telephone conversations, and time every facet of their work to the nearest second.

For too many Americans the white-collar assembly line has become a harsh, unstable workplace where their skills are devalued, where they have little job security, no say in the restructuring constantly going on around them and no refuge from the electronic monitor's relentless gaze. They are not well placed to press the boss for a raise, particularly since fewer of them enjoy the backing of labor unions. Nor are they enjoying the fruits of the increased productivity that they helped create. They are victims of what I call the new ruthless economy.

The U.S. Bureau of Labor Statistics (BLS) data for December came as a nasty shock for those who expected that the recent sharp upturn in economic activity was an immediate precursor of healthy job growth.

The gross domestic product has been growing since the fourth quarter of 2001, and it rose at an unusually high 8.2% annual rate in the third quarter of last year. The new BLS data, however, indicate that the total number of people employed, which has been growing slowly over the past two years after a jarring decline of 2 million in 2001, ended 2003 with a 54,000 drop from November to just under 138.5 million. This figure was up by a meager 689,000 from its peak in January 2001.

Of more concern to chemists, almost all of whom are on somebody's payroll, is the number of people on nonfarm payrolls nationwide. This number rose an inconsequential 1,000 in December over November. This puny growth left it a substantial 2.4 million below the high of 132.6 million set almost three years ago in February 2001. Total private employment remains at 3 million below its high, also set in February 2001.

There have been nine economic cycles in the U.S. since World War II. For the first eight, the downturn phase, as measured by the number of people on nonfarm payrolls, averaged about 13 months. It took an average of 10 months to regain the previous high.

The experience of the nation's biggest-ever boom in the 1990s indicates that a robust economy boosts payrolls by an average of 200,000 workers per month. So it will be well into 2005, at the earliest, before payrolls regain their February 2001 high--an unprecedented hiatus in payroll growth of more than four years.

As mentioned here, what is happening is a "perfect storm" of unemployment. The loss of manufacturing jobs combines with the loss of white collar jobs and the loss of jobs to robots to create employment stagnation. It will be followed by a period where, despite robust economic growth, unemployment grows. This is the nature of the Robotic Nation.

"An intelligent robot that could free genomics researchers from routine lab chores has proven as effective as a human scientist. The robot not only performs genetics experiments, it also decides which ones to do, interprets the results and comes up with new hypotheses."

The team compared the performance of the Robot Scientist with that of a graduate student doing the same experiments. Not only were the results just as accurate, but the system did not need to perform as many experiments because its hypothesis generator found solutions more quickly, so its costs were about two-thirds lower. 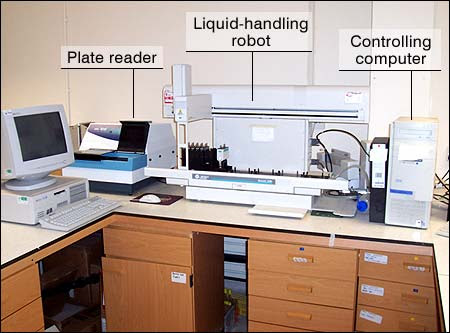 The conventional wisdom holds that robots won't be doing "human" things like "generating hypotheses" and "interpretting results" for decades, yet we are seeing the harbingers of it today. From the NY Times:

"It's like if you have a machine which is broken, the system can automatically reason to find all the possible ways it can be broken," said Ross King of the University of Wales, Aberystwyth. "Some philosophers have thought this is impossible for computers because that's the imaginative leap."

"It is now possible to design artificial intelligence systems that are able to reason well enough to be effective partners in scientific research," Dr. [Larry] Hunter [University of Colorado School of Medicine] said.

Despite the conventional wisdom, it really will not be that long before robotic intelligence is equivalent to, and then surpasses, human intelligence. See Robotic Nation for details.

Modern science has created a robotic umpire able to call balls and strikes. It is not being used in games yet, but according to the article Foolproof Umpire, The it would appear that the end is near for umpires:

"While U.I.S. is not designed to call balls and strikes in the midst of a game, Major League Baseball is using the system to measure the overall reliability of its human umpires. Ten of the 30 major-league stadiums have installed QuesTec technology (the equipment costs about $40,000 per venue, or about a tenth of a senior umpire's salary), and in the games played there, baseball officials have informed the umpires that their ball-and-strike calls will be graded against the computer's."

If the equipment costs a tenth as much as a human umpire, and if the robotic umpire does a better job, it is only a matter of time before the umpires are gone. The next time the umpires strike, they will be replaced.

Economically, replacing the umpires makes sense for lots of reasons. Why pay human umpires $400,000 per year when a machine does a better job? The problem is that millions and millions of jobs will succumb to this same pressure over the next 20 years -- everyone from pilots to Wal-Mart employees will be replaced by robots at approximately the same time. See Robotic Nation for details.

The idea behind the open PINO platform is to provide a humanoid robot chassis design that is "open", like LINUX is open. Researchers, engineers and inventors can access the design of this robot, use the plans freely, add to them, improve them and so on. The translation from Japanese is a little rough, but here's what the site has to say about this project:

You can build PINO from the plans, or buy a pre-built PINO chassis from a company called ZMP. Click here for photos and a movie of the ZMP product. The cost of the pre-built robot appears to be well below $50,000.

Because Honda has invested tens of millions of dollars in ASIMO, many people believe that humanoid robots will be extremely expensive and rare for the foreseeable future. This is not the case. The PINO platform, and others like it, show that inexpensive robotic platforms will be widely available to developers. The cost will be low enough for thousands of smaller businesses to get into the game. As computer power and vision algorithms become available, they will be deployed into robotic products quite rapidly and at low cost.