The 380-page report, issued by the U.N. Economic Commission for Europe and the International Federation of Robotics, said 80,000 robots were sold between January and June. Orders for new factory robots rose 35 percent in North America and 25 percent in Europe, in both cases mostly for use in the auto industry.... The increases have been fueled by price changes, increased sophistication and reliability, the survey said. Taking the global average, a robot sold in 2002 cost a fifth of what a robot with the same performance cost in 1990, the study found."

This price trend is why, over the next decade or so, employers will be able to buy very sophisticated robots for very low prices and start replacing millions of workers in the service sector (see Robotic Nation for details).

See also the the UN press release and this CNN article.

Visitors to CEATEC 2003 (Combined Exhibition of Advanced Technologies) met Morph3, a human-like robot about 30-centimetres tall developed by researchers at the Chiba Institute of Technology in Japan. It can perform back flips and karate moves thanks to 138 pressure sensors, 30 different onboard motors and 14 computer processors.

According to Frederic Kaplan, at Sony's robotics laboratory in France, "One of the key things we are looking at now is developmental robotics, where a robot learns."

Right now, we don't have any robots capable of learning and responding to situations with human-like intelligence. But scientists and engineers will eventually solve these problems in one of two possible ways:Either way, we will have intelligent robots walking and talking among us in 20 or 30 years. Now we can see that these robots will be able to karate-chop and sumo-wrestle their way right through crowds of unruly humans...

As kindergartners from Rudolph Elementary School approached the fire station Monday, Sparky the Fire Dog and Pumper was getting ready for duty. Sparky is a robotic dog who rides in his own child-size pumper truck.

Sparky the Fire Dog robot is an exciting new tool for teaching fire safety. A fully animated Dalmatian Dog and fire truck robot, Sparky can move, speak, listen, play audio cassette tapes, wink, blink, and move his eyes right and left, all by remote control. When he talks, his mouth moves in synchronization with these words. The fire truck can be made to go forward or in reverse and turn right or left. There are headlights, flashing emergency safety lights, and sirens on the truck - a great way to capture the audience's attention! Sparky can be used with great success in school classrooms, assemblies, station tours, mall exhibits, state and local fairs, parades, and any other setting where your fire safety message is presented. 3 to 12 year-olds love the robot but adults are amazed by the interaction as well.

One very common rationalization used to argue against the Robotic Nation is, "Human beings will never let robots replace humans in the workforce, especially in areas like teaching." Yet here we have robots interacting with kindergartners as the preferred means of education -- robots are better than humans at teaching fire safety to children.

This will be true in every area of education. Robots and computer-based video training will be more entertaining, more energetic, more "kid friendly", much more consistent and far cheaper than humans in the classroom. Human teachers will be just as vulnerable during the robotic revolution as everyone else.

The same will be true in day care centers. For example, Disney now has a wireless animatronic robot roaming in one of its amusement parks: 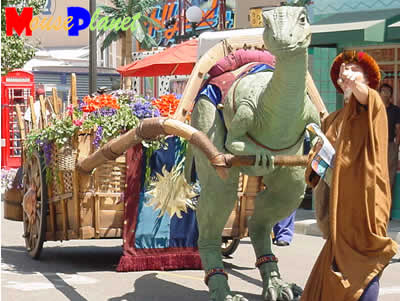 This article offers several other photos. This article also has a nice description. Right now these are not intelligent robots -- they are operated instead by humans using remote control joy sticks. But as robotic intelligence advances over the next 20 to 30 years, these creatures will become intelligent, autonomous beings.

See also: Why millions of teachers will soon be out of work.

In another exotic application, arrays of pentacene organic transistors have been built into a flexible sheet to create a pressure-sensitive “skin” for robots at the Quantum Phase Electronics Center of the University of Tokyo. The sensor arrays are built layer by layer on polyimide films. The design could be realized with large-area printing technology to create low-cost, flexible membranes that could imbue robots with a sense of touch similar to that of the human hand, making them much more dextrous than in the past, the researchers said.

Robots don't have a sense of touch right now, but touch combined with vision and a little software makes it easy for robots to have dexterity similar to that of a human being. Artificial Development, Inc. today announced that it has completed assembly of the first functional portion of a prototype of Ccortex, a 20-billion neuron emulation of the human cortex, which it will use to build a next-generation artificial intelligence system. Artificial Development will initiate testing of Ccortex in October. The cluster being assembled at AD.com Data Center is a high-performance, parallel supercomputer, composed of 500 nodes and one thousand processors, 1.5 terabytes of RAM, and 80 terabytes of storage.

The low-cost software/hardware system runs on Linux, Intel and AMD processors. When all sections are assembled, Ccortex is expected to reach a theoretical peak performance of 4,800 Gflops, making it one of the top 20 fastest computers in the world. The cluster will be used as a test bed for beta versions of Ccortex.

Ccortex is a massive spiking neuron network emulation and will mimic the human cortex, the outer layer of gray matter at the cerebral hemispheres, largely responsible for higher brain functions. The emulation covers up to 20 billion layered neurons and 2 trillion 8-bit connections.

So, in 2003, we have supercomputers running at 5 teraflops. Applying Moore's Law, we would expect to see machines that are 1,000 times bigger than that in 2023. That means a machine with 5 petaflops, 1.5 petabytes of RAM and 80 petabytes of disc space.

In other words, in 2023 we will have inexpensive supercomputers with the power of the human brain.

By 2043, supercomputers will have the power of 1,000 human brains. Inexpensive desktop machines will be running at 5 petaflops, and we will have inexpensive autonomous humanoid robots with the equivalent brain power of a human being. See Robotic Nation and Manna for details.

Many customers are thinking about using Speech Server, first and foremost, as part of their end-to-end call-center solutions, Lee says.

"By the time we ship (Speech Server), we expect all of these applications to be in full use," Lee says.

Various Microsoft divisions also are working with the Speech Server technology, too. The company has developed what it calls its "dial-zero" application that will allow callers attempting to reach Microsoft employees via the corporate switchboard to speak employee names that the system, which looks them up in the company directory. Lee says the Speech Server technology will allow callers an unusual amount of flexibility in how they speak (or even spell) the names. The final system will be deployed company-wide in another month, he says.

"The kind of interaction that Data has on 'Star Trek' is still 20 years away," said James Larson, program chairman for the 9th Annual SpeechTEK International Educational Conference and Exposition, which opened Monday and runs through Thursday.

For those unfamiliar with the character named Data, he is a humanoid robot (played by Brent Spiner) who speaks and understands speech at a level equivalent to a human being. So, by 2023 or so, the industry is predicting completely fluid, human-level voice interactions with robots.